The freight trucking industry operates with a perhaps surprising level of complexity and reliance on technology and data analysis in order to be profitable. There is much more to the business than picking up shrink-wrapped pallets at Point A and delivering them to Point B.

Less than truckload (LTL) carriers such as Central Freight Lines have hub and spoke operations. Small, local terminals are the spokes at the end of the line, and larger, more central terminals are the hubs. Spoke terminals collect local freight from various shippers and consolidate goods onto trailers to be delivered to the hub terminal, where freight is sorted and consolidated for transporting to the closest spoke to the end destination. 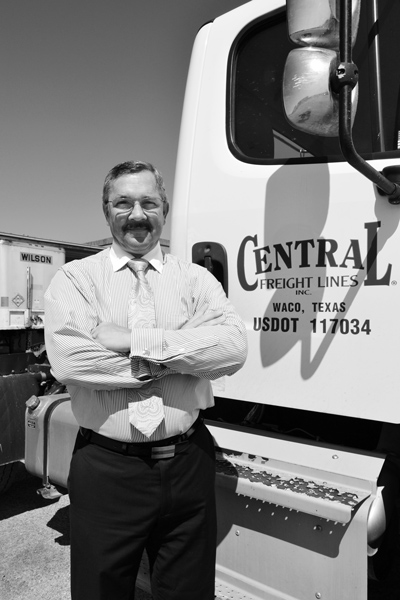 Variables such as weight, pieces, density, origin and destination, susceptibility to loss and damage, and handling requirements all influence the cost of distribution. Such shipment cost variances must be properly accounted for in order for carriers to make valid pricing, marketing, financial, and operational decisions.

To succeed in this competitive business, companies need to delve deeply into the details of every cost parameter. Central Freight CIO and vice president of IT Gregory Kocek has overseen the development of an LTL cost information system (LTL/CIS) that crunches cost numbers and is critical to profitability and competitiveness.

The LTL/CIS receives information from handheld devices that track the flow of cargo, including the amount of time spent at delivery and pickup locations. That allows the company to assign tasks with a much higher degree of accuracy than was possible in the past. Central Freight has used this information to shave costs in several operational areas including how it deploys trucks, which cuts fuel use.

Obtaining accurate cost information is complicated. For example, a vehicle mile in the direction of light traffic has a different value than one into heavy traffic. Also, consider that it takes longer to load a truck containing, say, a dozen pallets of two different items than six items of two pallets each. Efficiency at each terminal also depends quite a bit on local conditions. Variations can be attributed to things like the nature of the freight handled at the terminal, local traffic conditions, and weather.

Having efficient operations and robust IT systems to support them were essential for Central Freight to make a deal to acquire Wilson Trucking in 2017. Central Freight acquired Wilson’s network of twenty-six terminals in the Southeast to complement its operations in western and southwestern states. The transaction increased the size of Central Freight’s network by about 50 percent, and stretched its geographic reach into a new region of the country.

Such a significant jump in size would challenge any organization. An earlier significant investment in a state-of-the-art digital dispatch management system was also indispensable to helping the company quickly absorb Wilson’s trucking and distribution facility assets.

Central Freight has also invested heavily in fueling technology. It was one of the first LTL carriers to invest in and use compressed natural gas (CNG) tractors on a daily basis. “On average, the carbon footprint for a CNG-fueled vehicle will be 25–28 percent less than its diesel-powered equivalent,” said Don Orr, president and CEO of Central Freight, in a recent release. “As we reduce our dependence on imported oil and increase our energy security by utilizing our own natural resources, it continues to make good business sense for Central Freight Lines to utilize natural gas for the benefit of the company and the communities we service.”

In addition, CNG fuel helps the company save money on tractor maintenance. Natural gas burns cleaner than gasoline or diesel, so CNG-fueled vehicles can go longer between oil changes and engine tune-ups.

Central Freight has also begun adding sophisticated safety technology on new vehicle purchases. The OnGuard ACTIVE system provides audible, visual, and haptic warnings when a tractor gets too close to another vehicle. It also applies active braking to avoid collisions. This technology has reduced rear-end collisions by 87 percent for at least one LTL carrier, according to the vendor.

In another effort to keep drivers safe, Central Freight has tested on-board technology that detects dangerous driving maneuvers such as harsh cornering, rapid acceleration, and hard braking, warning drivers so they can self-correct in real time. In addition to promoting safety in real time, the system helps conserve fuel, reduces vehicle wear, and provides intelligence for both the driver and supervisor to promote better driving habits. Drivers get a daily score to measure how well they are doing.

Technology is pervading every corner of the trucking business, including the driver’s cab, the goods in the trailer, the dispatch depot, and the company headquarters. While many advances may be coming, there seems to be plenty of technological innovation in this industry, with those who implement well having the ability to grow and lead of the industry.

Cheetah is a global logistics technology leader in doing more with less on time. Cheetah is a premier provider of a dynamic, adaptive Logistics Operations Optimization Platform (LOOP) for retailers and carrier for hire companies in the logistics space, with a passion for the consumer. Cheetah’s LOOP and our experts address the logistics needs of healthcare, retail, and carriers that operate courier, less than truckload, truckload, and private fleets. Cheetah’s LOOP plans, dynamically manages, adapts, and optimizes fleets and drivers, resulting in companies using less trucks, driving fewer miles, and making more on-time deliveries.