When Dean Haacker considers the technological advances of the day—digital personal assistants, cars that drive themselves, biometrics, the inexorable push toward an era of technological singularity where the intelligence of machines will surpass that of humans—he is taken back to his teenage years, when the only computer in the entire school was a lone Commodore PC in the library. That boxy thing didn’t have many more brains than a scientific calculator, but Haacker somehow knew that the primitive PC held the key to the future—not just that of the greater world, but his own.

“My imagination was captured by what seemed possible with this new machine,” he says.

At home, Haacker spent hours playing Atari and sports-strategy games that were linked to probability matrices. In school, he learned BASIC programming and developed a program for people in the school that recommended dating partners.

“It was all for fun, but one thing I learned is that people didn’t always answer questions truthfully, which made the results unpredictable,” he says. “I guess that trend continues with social media today.” 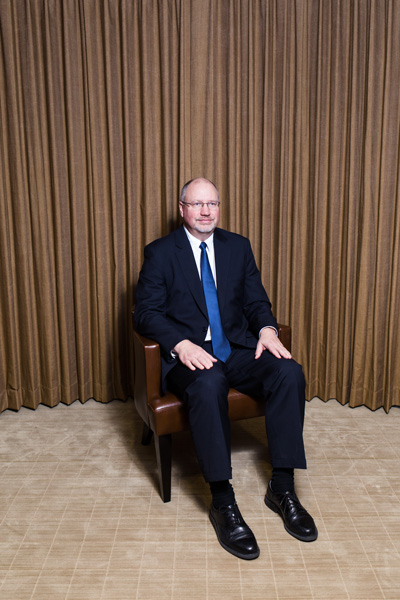 Being at the top of his class helped him land a job with the Hewlett-Packard Company in Palo Alto, California, in 1983. There, he got to work side by side with some of the best engineers in the world. As a software engineer building global sales and marketing systems, he worked with colleagues in Europe and Asia and traveled on the corporate jet. It was all as he had imagined.

“Eventually, machines will far exceed human intelligence, but that will take some time. In the meantime, enjoy the ride, and always remain curious and willing to learn new things.”

The company practiced a beneficence that was groundbreaking at the time, forsaking the hire-and-fire practice that many companies employed to ride up and down periods of the business cycle. HP instead held family picnics and beer busts and encouraged the workers to become shareholders. That engendered a fierce loyalty among the employees. In 1985, Haacker was part of the team that accepted a reduction in work hours and pay for several weeks while the company regained its footing during a downturn.

Twice a year, the CEO would address rapt employees over loudspeakers in its locations around the world. Founders Bill Hewlett and Dave Packard loomed large and iconic for Haacker. He eagerly absorbed the company’s explicit core values: trust and respect, meaningful innovation, achievement and contribution, uncompromising integrity, and results through teamwork.

“Dave Packard said that objectives can best be achieved by people who understand and support them,” Haacker says. “People who are allowed flexibility in working toward common goals in ways that are best for their operation. I’ve tried to learn from their examples and apply those principles to the teams that I am privileged to manage.”

Haacker says he planned to work at HP his entire career, but by 1996, his third child was on the way and his family’s living space was getting cramped, so he took a position with Motorola during a period of rapid growth. The experience he got at HP building and deploying global applications fit in perfectly with Motorola’s needs. Haacker was the first person at the company to work on marrying e-commerce with digital supply chains as globalization was taking root. The innovation helped the company save billions of dollars that they poured into research and development to launch products like the Razr phone.

He worked on the forefront of mobile application development and created banking, stock trading, consumer, and enterprise apps that ran on flip phones and 2.5G networks. The advances necessary for mass market success wouldn’t come until later with the Apple ecosystem, but Haacker is proud of the role he and the company played in mobile development.

“We had the vision for it all, including talking assistants and touch screens, but not the right timing,” Haacker says. “The experience taught me the importance of understanding the whole product and timing the market correctly.”

Other companies came calling, but Haacker, unaware of the disruptions to come, stayed put.

“Motorola was incredibly similar to HP and also made me very happy,” he says. “I had opportunities over the years to leave for exciting startups but chose the more conservative path.”

There had been many reasons to stay. At the time, the company was so flush and generous with its reserves that an annual bonus could buy a new car. But just a few years later, things went south with the telecom bust. Once-humming plants were shuttered and sold; others were converted into housing or commercial developments.

“It’s an important lesson to learn,” Haacker says. “Technology creates opportunities, but also disrupts established businesses in ways that can be hard to predict.”

With respect to his own career, Haacker handled those disruptions by reinventing himself and turning them into opportunities to advance his career. After the telecom/dotcom bust, he moved from software development to strategic sourcing and vendor management as IT outsourcing became common practice. He began to hone global IT governance skills, and when the recession hit in 2009, he was well-positioned to take a tech executive position with Nielsen. Then he moved into a CTO job with The PrivateBank in an industry that is on the cusp of a technology revolution in the coming years.

Having ridden the waves of technology for decades, Haacker is excited about what is still to come.

“Technology is evolving faster and continues to find new models of disruption,” he says. “Artificial intelligence promises to help us with everything we do. Intelligent agents will enable new ways to make us smarter and more productive. Blockchain technology will enable secure transactions with minimal cost and cycle time. Eventually, machines will far exceed human intelligence, but that will take some time. In the meantime, enjoy the ride, and always remain curious and willing to learn new things.”