Technicolor conjures an image of Dorothy, welcomed to the magical kingdom of Oz—not only by its inhabitants, but by an onslaught of electric colors, a palette never before seen by audiences in 1939.

Since then, “Presented in Technicolor” has appeared on title cards of Disney’s family films and Hitchcock’s psychological thrillers alike. Technicolor’s tenure as an industry standard in Hollywood film stretches back a century, and its propensity for redefining itself has ensured a continued spot as a leader in digital film production, storage, transportation, and communication.

That proud history has not been without its fair share of growing pains, though. Technicolor has at times necessitated extreme evolution in not only adapting to new paradigms, but in crafting its own. Chief information officer Ginny Davis adapts to and addresses the ever-changing needs of the marketplace, which led her to her pivotal role in Technicolor’s latest rebirth. Previously a Technicolor divisional chief information officer, Davis assumed her current role in 2008 after CEO Frederic Rose began prepping the company for a transition from its analog past to its digital future. “We actually had the foresight to plan for the next generation of our business,” Davis says. “That was really transformational.” 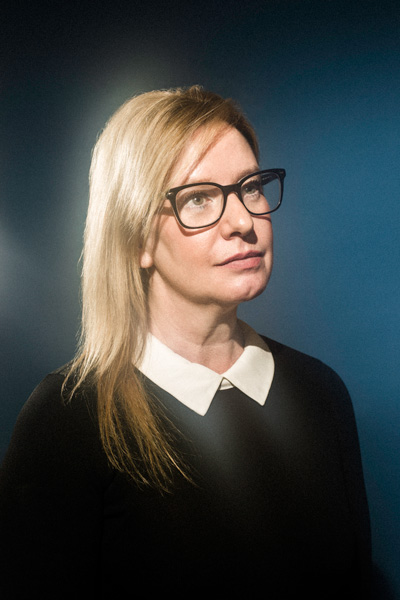 While the company underwent an extreme shift in both personnel and identity, vice president of corporate communications Lane Cooper emphasizes Davis’s importance in the midst of the transformation. “It would have been very difficult for the company to execute that severe transition without someone as trusted as Ginny,” Cooper says. “This measure of continuity provided some level of stability to execute a complete break with our past.”

Davis was initially brought in to oversee program management as Technicolor began its move from VHS to DVD formats. Her supply chain and processing background benefited the company in its migration to DVD and transition to automating the duplication process. But the work was just beginning.

With multiple sites around the world, Davis was tasked with creating a network that would help streamline the workflow of three separate parts of Technicolor’s organization: artists actively working on films, research scientists creating cutting-edge technology for Technicolor, and business development professionals responsible for getting that technology into the hands of consumers. The Technicolor Production Network, a ten-gigabyte proprietary network, has grown from six original sites to thirty-seven around the world, and it has transformed the way in which Technicolor and its partners collaborate. Huge digital files can be shared in real time from London to Beijing to Los Angeles. “It’s obviously an integral part of our fabric, especially in terms of visual effects,” Davis says.

The importance of tailoring that network for Technicolor’s various artists and professionals cannot be understated—and neither can Davis’s accomplishments. “It’s a complex business, but we have three complex businesses,” Cooper says. “That requires vision and execution. Finding the common threads that bring these three different complex businesses together is a hat trick. That’s what she has pulled off.”

“That’s what it’s about: making people believe they’re capable of more than they think they are.”

Those were not the only projects brewing. Over an eighteen-month period, Davis began redefining the function of IT at Technicolor. The department started by adopting an “as service” model that has largely changed the way IT does its job. A significant portion of the company’s nine thousand desktops and laptops were converted to a virtual desktop infrastructure, which allows for centralized management, automatic backup, and increased security. About 90 percent of corporate function applications were moved over to software, and on-demand app licenses were offered for users. Meanwhile, Davis placed an emphasis on automating IT and offering self-help and self-service for customers. “Forty percent of functions can now be done by customers who don’t have to wait for someone to call them back,” Davis says. An intercompany platform called Constellation was created to deliver one-click self-service through multiple cloud environments in a single interface and has been instrumental in driving innovation.

Davis’s job—which has essentially been to manage several complete overhauls that have had company-wide ramifications—has not been without its fair share of stresses. “The change that we went through turned over about 65 percent of our people,” Davis says. “It was intense, but the team understood the mission. Technicolor is changing, and we need to change with it.” Davis was tasked with and succeeded in increasing flexibility, reducing cost, and finding ways for fewer people to do more on the IT side of the business. “I think people were skeptical if we would ever adopt the cloud strategy fully,” she says. “To have proven that wrong is something for us to be proud of.”

Modest yet concise, Davis attributes her success to her own flexibility in leadership. Her focus tends to be on listening first to the 321 staff members she oversees and the strategic partners who provide more than five hundred additional team members. “It takes a lot of time, but it’s valuable time because I understand where they want to go,” she says. “As a service provider, knowing what the customer wants is essential. I’m a service provider. If they’re not happy with the service I’m providing and I’m not communicating the value of the service I am providing, then we will be replaced—and rightfully so.”

Davis is something of an anomaly. She was a company veteran promoted from within to instigate massive reorganization and restructuring. “The average life span of a CIO is three years,” Cooper says. “That might be even more perilous in the entertainment and technology industries.” However, Davis has not only weathered the transformational storm at Technicolor, but she has also blossomed in it. “Over a long tenure as a CIO, she has retained a culture of innovation inside an IT organization,” Cooper asserts.

An avid hockey and football fan, Davis cites explosive former Dallas Cowboy coach Jimmy Johnson as a source of inspiration. “In terms of his leadership style, they may not have had the talent to win a Super Bowl, but he made them believe they had the talent to win the Super Bowl,” Davis says. “That’s what it’s about: making people believe they’re capable of more than they think they are.”