Like her great-grandfather before her, Andrea Campbell builds things. But where his trade called for brick and mortar, her trade relies on optical fiber. As the chief information officer of upstate New York’s Keuka College, Campbell has spent the past three years building a brand new digital infrastructure from the ground up. That means a new data center, new storage, a backup recovery system, and loads more. Now, the college is well on its way to becoming a forerunner in its integration of technology and education.

Education was never Campbell’s passion, however. Surprisingly, technology wasn’t, either, though she certainly had a knack for it. Campbell recalls accidentally reformatting the hard drive of her IBM 286 as a child, then rebuilding it all on her own. “It was intuitive to me,” she says. “My dad opened my eyes up to it. He allowed me to kind of play and really explore technology in its early phases.”

When she was young, Campbell dreamed of being a lawyer. Luckily, when she discovered that her law school classes were “as dry as toast,” she had something on which to fall back. Her father, grandfather, and great-grandfather all worked for technology juggernaut Kodak, and the company reserved internships for the offspring of its employees. After a brief secretarial stint, Campbell moved into Kodak’s IT department. “The passion for law wasn’t there anymore,” she says. “At the same time, technology was easy for me and enjoyable, so what started as a job ended up morphing into a career. It just organically happened.”

At twenty-six years old and after just two years of full-time employment with Kodak, Campbell was made the manager of the desktop support team. There, she combined her technological know-how with her legal expertise. She was actively involved in contract writing and negotiations—across just about every infrastructure group. She credits her mentors for her swift ascent, specifically a young, single mother who helped her navigate the politics involved with being a female leader in a male-dominated environment.

“My knowledge was always challenged,” she says. “That was really an important lesson, that it doesn’t matter what skills I bring to the table. The reality is they see me as this young female—‘And what can she provide?’”

Campbell says it was hard at first, but those years taught her perseverance, drive, and motivation, as well as the ability to maneuver and navigate through the political environment. 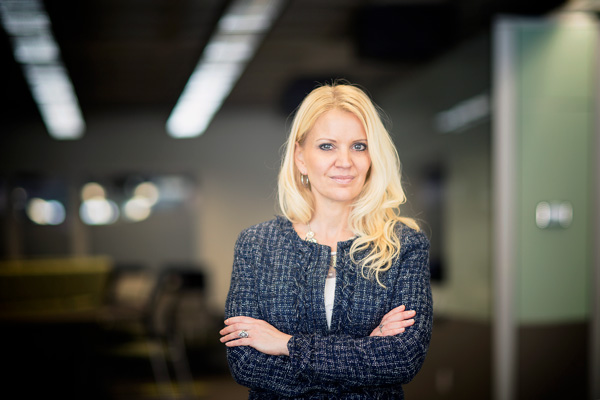 Transitioning To The Education Industry

However, she found higher education appealing. Campbell liked the better work-life balance. She also enjoyed that it was a mission-driven industry rather than a profit-driven one.

“You can be a lot more creative, and you can see the difference in your creativity,” she says. “In the corporate area, you’re in the basement and they throw scraps of food to you every once in a while, but you never see the end product of what you’re working on. In higher education, you really do see that. You’re there to make these students’ lives better and to make their educational experience a positive and meaningful one.”

But Campbell still felt like something was missing, though she didn’t realize what it was until she was invited to interview for a position with Keuka College. She found that she wanted to make a bigger difference. At the University of Rochester, she was just moving things along and doing tasks that she already knew. There, she was given the strategy, but at Keuka College, she was able to build and drive a new strategy.

First, she had to rebuild the college’s entire digital infrastructure. In doing this, she sought to leverage all network capabilities, wireless and cloud computing, and bring-your-own-device capabilities to enhance the curriculum. For a long time, Keuka has been known for its experiential, hands-on approach, and Campbell believes technology can help elevate that reputation. She’s excited by the possibilities of augmented and virtual reality, as well as the capacity for 3-D printers, to provide immersive, tactile learning experiences to students.

“Technology is a strategic partner now. It’s not just an operational unit.”

For Campbell, the digital age calls on technologists to be a bigger, more integral part of higher education. “Our job as technologists is to help people understand the latest and greatest tools out there and then collaborate on how they can best be integrated into the curriculum,” she says.

On that note, Campbell says Keuka doesn’t want traditional computer labs. Rather, the goal is to have students be able to bring in any device, regardless of the brand, and learn in an open environment. That way, students are helping to teach, and they are a part of the learning cycle instead of just passively watching a teacher give a lecture. Throughout higher education, organizations are trying to reduce their reliance on the traditional lecture style, and technology leaders are being tapped to create innovative alternatives.