You might say that Aravind Immaneni takes to ambitious transformation like a fish to water—in fact, he’s an active triathlete who didn’t swim until his thirties. And he’s self-taught.

After he completed his executive MBA in 2006, Immaneni realized that he had suddenly regained twenty hours of free time per week, so he decided to try a triathlon. First, he had to learn to swim; but his first race hooked Immaneni, and it has become a regular part of his lifestyle.

Transformation like that doesn’t occur without discipline. “If you have an intention, but you don’t plan and continuously integrate it into your life, it won’t happen,” Immaneni explains. A compelling vision, rigorous planning, and disciplined implementation are three principles Immaneni also applies at Fifth Third Bank, where he’s served as the executive vice president and chief operations and technology officer since November 2016.
As he came on board, Fifth Third was at the starting line of a new three-year strategic transformation called NorthStar. It’s a comprehensive plan to enhance products and processes through technology, workforce agility, and strategic partnerships in order to deliver strong returns through longer economic cycles. 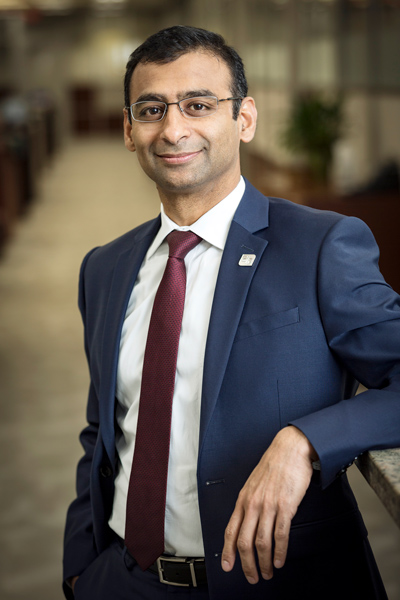 Four interwoven factors made far-reaching, intentional transformation imperative for Fifth Third: changing consumer preferences, evolving technologies, economic realities, and the heightened regulatory environment. Evolving technology has made information more available and convenient for consumers, and in turn, their preferences have guided further innovation. Meanwhile, unemployment is low, infrastructure spending is a trendy topic, and the regulatory pendulum, as Immaneni describes it, is swinging back from its punitive post-2008 apex.

Every Sunday, Aravind Immaneni and his triathlon coach review the preceding week’s workouts, all of which are captured from his watch and uploaded to a mobile platform. They use the data and jointly craft a plan for the upcoming week. Work might disrupt that schedule, but their fundamental goal is to make continuous improvement by doing something each day—even if it’s just a twenty-minute session in the weight room or a short run. In a typical week, Immaneni completes ten workouts between swimming, biking, running, and strength training. “Missing a workout or two doesn’t stress me,” he says. “I used to, but I’ve learned to stay focused on the bigger vision of continuous improvement.”

Immaneni has completed two IRONMAN-distance triathlons, each of which consists of a 2.4-mile swim, 112-mile bike ride, and 26.2-mile run. He’s currently focused on improving his time in the half-IRONMAN distance: he’s aiming to finish in less than five hours. “I would have to take fifteen minutes off my previous best,” he says. “It’s a lofty goal, but even if I get close I will be happy with the effort and the journey.”

In the past 18 months, Fifth Third announced partnerships with AvidXchange, a provider for accounts payable and payment automation; Transactis, a leader in the electronic billing presentment and payment space; GreenSky, a credit application and payment technology provider; ApplePie a loan origination platform focused on lending to franchise owners; and Zelle, a person-to-person real-time payment system. The bank has also made a handful of venture investments in promising young fintech companies it hopes will soon become partners of the bank. “These fintech partnerships leverage new ways to improve customer experience and enhance our revenue model, in addition to reflecting the Bank’s move toward a digital customer experinece” Immaneni says.

However, Fifth Third’s transformation doesn’t end there. “To change the pace of play, we not only have to evolve our infrastructure, but also how we engage our employees,” Immaneni says. “To this end, we have an ambitious plan to transform how employees work together, the tools employees use, and our physical workspace. Our vision is to create a lean and agile organization supported by technology, intelligent workforce planning and automation.”

Fifth Third’s transformational efforts have necessitated significant cultural changes. To support their overhaul and sustain new practices, Fifth Third president and CEO Greg Carmichael and his enterprise leadership team are implementing new approaches from the top down. A move toward Agile methodology is just one example of the transformation of the culture and mind-set at Fifth Third. Rather than the traditional waterfall method, in which siloed departments execute sequentially, an Agile framework incorporates members from disparate organizations into one collaborative, customer-centric team from the beginning.

While an organization might congratulate themselves for implementing agile processes on a specific project or business line, it’s far more ambitious, not to mention more demanding, to move the entire enterprise in that direction. “In order for that to happen, we have to change our mind-set, our processes, and how we approve and manage projects and risks. That is a huge cultural transformation for us because we are a traditional bank,” Immaneni says. “Agile concepts are not new, but something that banks have not fully embraced at an enterprise level.” With the implementation of these concepts, Fifth Third hopes to enable a more efficient, customer-focused organization.

In alignment with the organizational evolution, Fifth Third celebrated a brand relaunch on their namesake day, May 3rd (or 5/3). “Our vision is to be the one bank that people most value and trust,” Immaneni explains. Making a fresh start in recommunicating that vision is crucial, which led to communicating how Fifth Third is building a better kind of bank to make banking at Fifth Third better for its customers.

“It describes the importance that we place on going above and beyond with our products and our services,” Immaneni says. “What we are saying is that we will go 166.7 percent above and beyond the call of duty to take care of our customers.”

Immaneni has found that he and Fifth Third suit each other well. It was the customer-centered culture that drew him in, and his sense of mission and discipline have made him a strong leader to support the NorthStar transformation. “Endurance sports help me stay more balanced and organized,” he explains. “Because of this drive for continuous improvement, I’m not only a better athlete, but I’m also a better person and a better leader.”