Professional baseball scouts look for more than raw talent. They’re interested in skills like speed and power, but they know how other often overlooked characteristics can take a player to the next level. Those traits include respect, hustle, reputation, leadership, heart, charisma, and determination, and are known as the “intangibles.” Daniel Shmitt, CIO at BAMTECH, has carefully imported those same traits into his work as a technology and business strategist. The intangibles helped him build, grow, and sell a wildly successful IT services consultancy firm before he was called up to the big leagues in 2015.

Recently, Shmitt led a team that built and managed all back office support systems for Major League Baseball Advanced Media (MLBAM). However, his passion for technology started in the junior high computer lab. Although his family didn’t own a computer, the young Shmitt was able to borrow one of the school’s TRS-80s each weekend. “I’d write my own programs and try to push the machine to see what I could make it do,” he recalls. What started as a hobby soon became an obsession. Shmitt enrolled at the University of Wisconsin-Milwaukee to study information technology. Upon graduation, he accepted a job as a systems administrator and began managing and building complex systems from scratch.

In 2006, Shmitt opened his own managed service provider known as Shmitt Technologies. In the early days, he was providing end-to-end support for financial services firms. When he sold the organization to join MLBAM in 2015, Shmitt Technologies had more than one hundred clients and millions in annual revenue. Shmitt says it was an obsession with customer service that set his company apart. “We wanted to become an extension of each client’s business,” he explains. “The team wanted to be best in class. We wanted to take care of each account better than our competition could no matter what.” 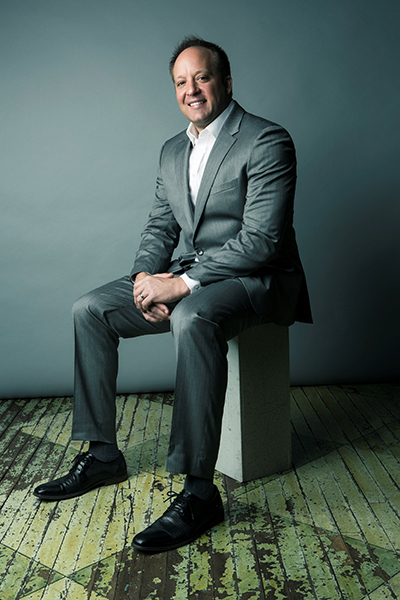 For Shmitt, achieving those aspirational goals was all about leading by example. If the company did a weekend or overnight migration, he was there after hours, leading the charge. When hedge fund managers required complex monitor configurations, he’d personally string monitor cables and network cords. Because he knew loyalty and long-term business were more important than a quick payday, he’d accept little jobs or even lose money on small office moves that led to repeat business.

Shmitt focused on hiring like-minded individuals and imparted these beliefs to each person on his leadership team. In fact, he codified the philosophy in the “Shmitt Technologies 10 Commandments of Good Business.” Those guidielines were clearly visible in each meeting room, break room, and shared office space. The customer-centric commandments—such as “customers are not an interruption of our work, they are the purpose of it”—set the tone for the entire organization, instructed employees to value every client, and permeated the culture that Shmitt was building. “We would do the things that most people don’t think of. And those small things add up to make a big difference,” he says.

Soon, the company earned a reputation for customer service. It was also known for leading IT capabilities and its ability to build complex systems, improve efficiency, and lower costs. Major clients came calling, including Major League Baseball, which asked Shmitt Technologies to install datacenter equipment. The initial job led to more work, and soon, Shmitt was sending teams across the entire nation to install IBeacon technology in twenty-eight of thirty MLB stadiums. Soon after, MLBAM’s CTO, Joe Inzerillo, asked Shmitt to join his team.

Making the Leadership Leap to MLB

Shmitt sold his own company and made the leap to MLB in 2015. When he joined the organization, he was responsible for three entities including Major League Baseball Advanced Media, Major League Baseball Office of the Commissioner, and Major League Baseball Network. He set out to define a road map and set a vision for the back office technology that allows the business to run. While Inzerillo kept running the group’s media and streaming side (MLBAM is a billion-dollar tech business that sends live content to MLB.com) Shmitt and a team of forty-five people worked to standardize technologies between the three siloed outfits to create one unified, efficient, and savvy organization that those in the know referred to as “One Baseball.”

While the two-year project was challenging, Shmitt’s experience with his own IT firm gave him the skills he needed to succeed. “When you start and run your own company, you’re responsible for every failure and every success,” he says. “You have to know a little bit about everything.” A broad skill set helped him lead various teams and subgroups well, and he did so with the same commitment to customer service that underscored his decade of success at Shmitt Technologies. “I always ask my lead people how they want the business to view their team. We want people to see us as the solution providers, and we have to position ourselves in a certain way and provide consistent, quality work so that when people think of us, they think of the best,” Shmitt says.

The future of BAMTECH

In August of 2017, the Walt Disney Company announced plans to purchase a leading stake in BAMTECH, a digital company split out of MLBAM. The deal, worth more than $2.58 billion, will pave the way for a new ESPN-branded direct-to-consumer sports streaming product and other offerings that will become available during or after 2019. The streaming service will bring thousands of sports events to digital devices worldwide. To prepare, Shmitt and his teams are building new back office systems. In fact, he recently decided to take on a new role with BAMTECH, now acting as the organization’s CIO.

A lot has changed for Shmitt since the eighth grade. He’s led a top consulting firm and now works with one of the nation’s largest digital media companies. He’s loaded the most modern technology into the nation’s iconic sports stadiums. He leads a top team in one of the world’s most famous cities. But in many ways, he feels like he’s still back tinkering with that RadioShack Tandy Model III. “I enjoy building something from nothing,” he says. “No matter where I’ve been in my career, I’ve always loved discovering how technology works so I can then tinker with it to get the best performance possible.”

When starting his own business, Daniel Shmitt needed to put together a list of rules that would help drive best practices. Through looking over the lessons he’d learned in his education and career, Shmitt adapted some key take-aways that would ensure Shmitt Technologies would find success.