Brian Bowers is all about culture—but that wasn’t always his focus. The CTO at Bell and Howell developed an early love of engineering; as an eight-year-old boy, he took apart and reassembled calculators. But that passion eventually transitioned into a career of “value engineering.” Bowers now takes apart and reassembles operations, helping the Durham, North Carolina-based postal, manufacturing, and communications company’s people and processes maximize their potential.

Bowers was born outside Pittsburgh, but his family moved frequently, eventually settling in Buffalo, New York. He was a natural engineer; after his father set him up with an early calculator, tools, and a manual, Bowers was hooked. “I had a great understanding of mechanics and how it worked,” he says. “And then computers came into the picture and I became hooked on that.” Bowers studied business administration for a while but found it uninspiring and transferred to the Rochester Institute of Technology, where he earned a degree in manufacturing engineering. (He also found time to marry his high school sweetheart, Linda; they now have two grown children.)

“The program covered so many different areas, like efficiency work flows from an operations perspective. I fell in love with that,” he says. Bowers then earned a master’s degree in product design and development from Northwestern. “That program interested me because it was a cross between a technical degree and a business degree,” he says.

Bowers began his career at IBM’s avionics manufacturing, and eventually worked in value engineering, which he describes as “taking people’s designs and cost-reducing them and making them better.” He moved to several other companies, and even came back to IBM for a time as a technology planning manager. “That was the best job I ever had. When you’re in operations, it’s a day-to-day firefight,” he says. “Technology is all strategy. The deadlines are far out, and that gives you time to get a thought process.” 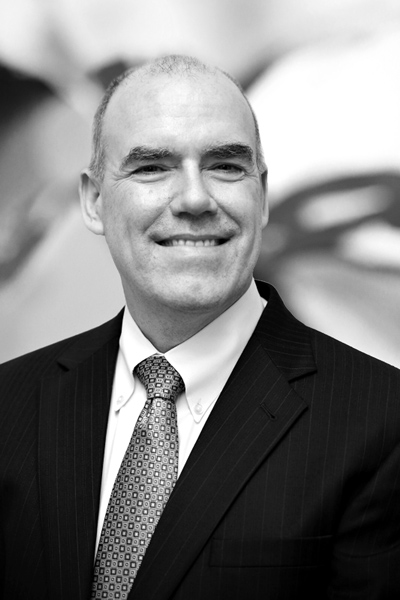 After stints at Lockheed and PTI, Bell and Howell approached Bowers in 2002. “At my interview, they said, ‘We want you to become the heir-apparent to the vice president of engineering and take over in three or four years,’” he says. “They had a plan for me, and wanted me for me.” Instead of three years, Bell and Howell named Bowers executive director after six months. He was charged with changing the organization’s culture.

“We needed to be nimbler, have lower costs, and be more customer-focused,” he says. When he walked through the engineering group, Bowers recalls, he never heard an engineer talking to a customer—they always sent them to a service number. “I believe in communication, and I reminded the engineers that customers are our number-one priority,” he says. “With no customers there is no revenue. With no revenue there is no business. With no business there is no job. If a customer needs our help, we will stop doing whatever we’re doing, fix the customer’s problem, and then go back to what we were doing.”

Facing New Challenges as a CTO

Within three years, a walk through engineering would reveal about a third of the people talking to a customer or to someone in the field and solving their problem. Bowers made that change by making the work environment more like a family. “You hear that a lot from executives: be like a family. And we are as dysfunctional as all large families,” he says with a laugh. “We have bickering, gossip, but if anyone says, ‘I need help,’ everyone drops what they’re doing and helps. That’s what families do.”

Becoming CTO presented new challenges, the biggest of which was that the role came with a completely different set of expectations. “The big jump was trying to get culture unified across five different facilities,” he says. “Each facility had their own culture, so it was hard.” One success story involved adopting an innovation program and process designed to take ideas for innovation to thumbnail business cases in 30–45 days. “We would have great ideas, but whoever had the bigger title, their idea won,” Bowers explains. “We had a lot of things that would bear zero fruit.” The new process vetted those out and focused on the ones that would cost less and be more likely to flourish.

“This has gotten us into new partnerships that I think will change the face of Bell and Howell,” Bowers says. “We can see the results financially. Our revenue is increasing, and it will double in the next couple of years.” The organization’s culture is changing, and it isn’t because someone is making orders from the top-down. “The culture changed because of the innovation process and being inclusive of different groups and soliciting new ideas,” Bowers says. “We are happy. People are part of the whole team as opposed to part of their department.”