The walls vibrate with anticipation as thousands of basketball fans enter the Spectrum Center in Charlotte on game day. With every Kemba Walker jab step and silky-smooth jump shot, the hum grows louder. The Hornets faithful cheer on the possibility that their team makes the playoffs and even potentially win its first ever championship. Most people glue their eyes to the court. But Chris Zeppenfeld helps put the buzz in Buzz City by keeping track of a dozen other things.

“We’re installing new Wi-Fi, a new point of sale system, and a new app,” says Zeppenfeld, the Hornets’ vice president of business intelligence. “We have our concessionaire as well as the team. That’s five different companies that all have to be on the same page to provide the best possible experience for fans.” Getting all those individuals working together requires as much teamwork as the Hornets need on the floor. But, he adds, he and his team can’t just order others around. 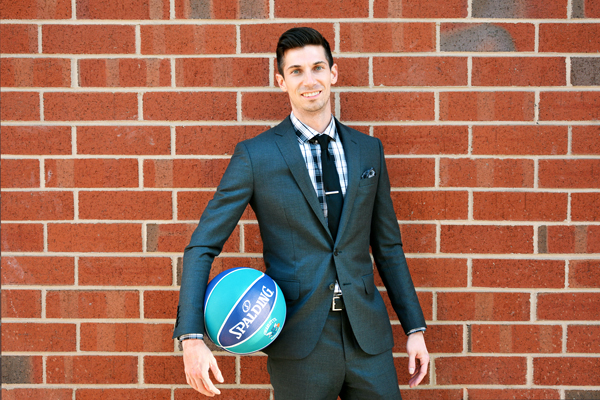 From the onset of his career, Zeppenfeld has focused on building strong relationships, business acumen, and technical expertise. Like many kids, he badly wanted to be an athlete when he grew up. Zeppenfeld played soccer through high school, and upon finding he wouldn’t be able to make the sport a career, he needed to find another way into the field.

Learning From the Godmother of Sports Business

His first stop after earning his bachelor of science in business administration was TeamWork Online, the most used recruiting job board in sports. The company was founded by Buffy Filippell, the “godmother of sports business,” as Zeppenfeld calls her. Filippell had been an executive recruiter for senior jobs such as general manager and team president for sports organizations.

After starting her own company, Filippell hired Zeppenfeld to handle the more public-facing aspect of TeamWork Online. In that role, he worked with about seven hundred sports teams to help them identify and recruit candidates for other roles. “Working for Buffy was like an MBA on steroids,” Zeppenfeld says. “I got to learn how all of these teams were structured and how they hired talent.”

Still early on his career journey, Zeppenfeld needed to develop his own job. The first big breakthrough came when he moved the company’s customer information out of Excel. He then built a proper customer relationship management (CRM) system. “I had done a little bit of that in college and really found that was my niche,” Zeppenfeld says. “I was very focused on seeing things in a building-block formation and then parlaying that with my analytics background.”

Zeppenfeld strengthened this skill set over about four years with TeamWork Online. Then, around 2009, the teams he had been helping source candidates for began installing roles for individuals with CRM and analytics expertise. The Charlotte Bobcats, as the team was known before returning to the Hornets name, were at the vanguard of that movement. The organization hired Zeppenfeld to revamp its CRM. “It was an unmitigated disaster,” he says with a laugh. “But we got it working, added new stuff to it, and got other departments on board.”

A big part of that buy-in came when Zeppenfeld built the capacity for the CRM to deliver data-driven plans. He added an analytical wing to his work and then started working on surveys. The role evolved over time into database marketing, data warehouse, the mobile app, pricing, and email strategy as well. “I realized that this sounds like what Fortune 500 companies would call business intelligence,” he explains. Once that realization weighed in, the Hornets started to hire experts in each field so that Zeppenfeld could oversee them and build out best practices. 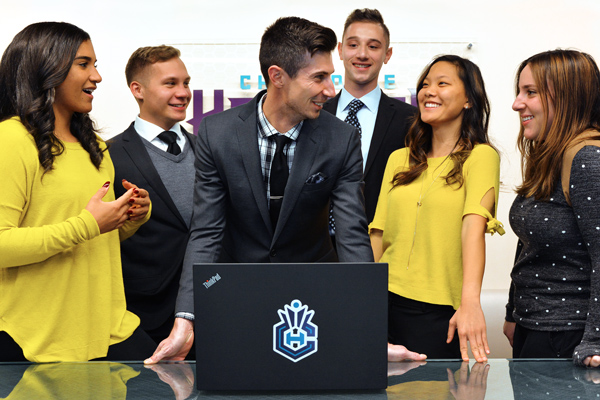 Over time, more and more teams and individuals began to see the value that the newly evolved business intelligence team could have on the Hornets as a whole. As its own separate vertical, Zeppenfeld wants to ensure that the team can, in a sense, make revenue-neutral decisions. He also wants the team to be able to prioritize the projects that will provide the greatest impact. The department also acted as a case study for the way in which technology could push the entire organization to become more sophisticated. “Business intelligence became the experts, so to speak, of getting the data source, transforming it, getting it ready for consumption, and helping make better data-driven decisions throughout almost every department.”

One of the biggest challenges that the business intelligence team faces, however, is the fact that a single Hornets fan can interact with each of those departments, though not necessarily with any consistency. That fan might sign up for an email list as John Smith and use a credit card with his full name Johnathan Smith at the team store. He might tweet about the team as JohnSmith84 and buy a ticket as John D. Smith. However, Zeppenfeld and his team would benefit from being able to consolidate those touchpoints under a single identity and get a clearer understanding of each individual.

In order to do so, the business intelligence team takes a four-step approach. First, the team members need to collect all that data into a data warehouse. Next, they transform the data into a single unified, usable form. Once they complete that step, Zeppenfeld and his team can analyze the data to find trends and learn more about individuals. Once that happens, they can present that data to management so those lessons can make for better informed decisions across the business. Zeppenfeld ensures his team can handle the first three steps. He himself wants to make sure he can use his expertise to take the lead on communication. Zeppenfeld uses visualization tools like Tableau to ensure nonstatisticians can understand the takeaways and have access to the live analysis 24/7.

And although the Hornets have to compete against other teams on the court, the teams share best practices in the business intelligence field. “It’s not like we’re competing against the Atlanta Hawks for ticket sales,” Zeppenfeld says. “From my time at TeamWork, I learned that NBA teams are by far the most collaborative with each other on the business side. The NBA even has a Team Marketing and Business Operations group, in which league executives exchange best practices amongst the teams. One great advantage I have is that I can ask my compatriots what they did when facing similar challenges.”

One of the biggest challenges—and opportunities for growth—that Zeppenfeld sees in the professional sports business intelligence world is personnel. Across the NBA, these teams are rather lean and budgets aren’t necessarily the most robust. Zeppenfeld has been able to build his team with extremely talented individuals. In that process, he has identified that there are a lot of individuals that have ten-plus years in the business. There are also a lot of junior analysts in their first few years with a team. However, there’s a gap where there are not a lot of people at the mid-level with, say, 5–7 years of experience.

“We have to really challenge our junior analysts to develop the skills needed for working with senior management,” he says. “It’s encouraging that we’re seeing a really diverse group of new candidates, especially as a lot more women enter the field. Now that the business intelligence field is growing, if you’re smart and good with data, there’s a role that offers a good start into an organization and provides an incredible growth path. In fact, full-time and internship hires for the business intelligence time have been split equally among men and women.”

But each and every game day, thousands of fans flood into the Spectrum Center hoping for a Hornets win and a totally seamless experience. If the app says they can order chicken tenders, they want the food to be ready to pick up from concessions. They want to be able to use their phones when entering at the gate rather than carrying physical tickets.

“They want the ability to purchase seat upgrades and buy special experiences at a touch of a button on their phone. Of course, fans still want engaging content and team articles—and we’re providing new features over the course of the early part of the season. We want to make sure they can get in to watch the game and spend less time waiting in lines,” Zeppenfeld says. “We want our fans to use their phone as a sort of ‘remote control’ to enhance the experience here at the Spectrum Center.”

Going Above & Beyond with Michael Jordan

Growing up in Pittsburgh in the early 1980s, Chris Zeppenfeld didn’t have a local NBA team to root for. However, he was a fan of the sport. “There’s actually a picture of me in one of those loud ’90s Charlotte Hornets T-shirts,” he says. But like just about every kid at the time, he also had some Chicago Bulls gear. And now he works for the Charlotte team for owner and Bulls legend Michael Jordan.

“When I tell people I work for the Hornets, they always ask whether I’ve met Michael Jordan. And the answer is yes,” Zeppenfeld says with a laugh. “Michael came into our first ticketing meeting after becoming owner. I was giving a presentation on dynamic pricing, price codes, and getting all in the weeds. Vice chairman Curtis Polk was really interested in that. Michael wanted to know where we stood in relation to other teams, not the p-value of my regression analysis. That’s how competitive he is. He’s one of the rare athletes that makes a massive personal impact, but also wants businesspeople to contribute their own expertise. He’s also so involved in the community. We get all these opportunities to do volunteer work.”