Along with its strengths in cooperative education, research, and civic engagement, Drexel University has a history of innovation. Its students and staff learn by doing. Both out of necessity and by inclination, learning by doing is how Drexel University vice president and CIO Thomas DeChiaro became the leader he is today.

DeChiaro joined Drexel in January 2016. He is charged with shaping the university’s information technology vision to support and extend the impact of its strategic initiatives. DeChiaro brings more than twenty years of strategic IT experience and leadership to the Philadelphia-based university. That experience crosses both higher education and the private sector. But a long and fascinating road led him to Drexel.

DeChiaro is entrepreneurial by nature. His first brush with technology came during his time as an undergraduate at Brooklyn College. There he ran a DJ and wedding video business on weekends to make extra money. During that time, burgeoning technology piqued his interests. So, he decided to major in computer science.

In the early days of the PC, most programming on mainframes was done with punch cards and “dumb terminals.” Companies were intrigued by the computer’s possibilities, but they hadn’t quite figured out how to leverage the technology. DeChiaro saw a need that he could fill. 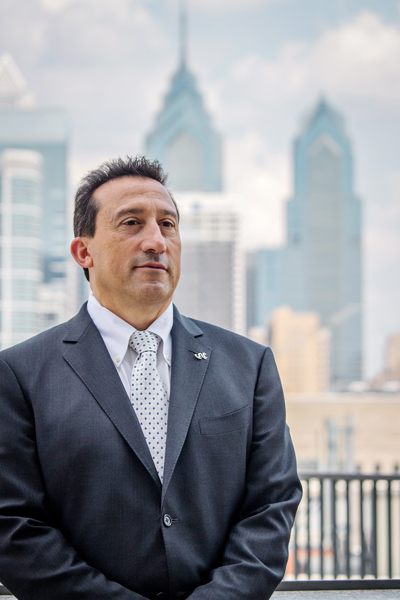 “There were a bunch of small companies that were looking to implement solutions with PCs,” he explains. “I thought: ‘I’m in this field. Can I make something work?’”

Although DeChiaro saw promise, there were few existing platforms to guide him. Undaunted, his entrepreneurial instincts pushed him forward, and DeChiaro taught himself software development from the ground up.

“When you wrote these applications, you had to build every component yourself, including file management, print spools, and user interfaces,” he says. “I learned a lot through trial and error, with nobody to go to for help. It was an interesting time in my life; I had so much going on.”

Innovation in the Print Room

One of DeChiaro’s clients was a local print company that specialized in thermography (raised printing) and had put together the business cards for his DJ business. The client wanted to be able to manage inventory and print invoice and billing documents that had a consistent feel. To accomplish that, DeChiaro built applications on Z80-based 8-bit microprocessors with 64 KB of RAM running CP/M, as well as utilizing floppy disks with only 180 K of storage. DeChiaro worked 12–14 hours each day for six months to write the applications. He remembers many times when he would hit a brick wall, go to sleep, and then wake up in the middle of the night with a possible solution. He’d write the solution down and go back to sleep.

Once DeChiaro completed and deployed the solution, the client was thrilled, and more companies came calling. DeChiaro had built his reputation as someone who could get things done. After a stint crunching census data for the City of New York, he left the East Coast for California to work for Bank of America.

Next, he joined IBM to transform the way the company managed and tracked intellectual property, often working on systems that managed invention disclosure through patent prosecution. Each patent’s value was based on its potential licensing value. The patent was usually filed globally, and this process took the company’s patent portfolio value up.

IBM initially used its patent portfolio to give it freedom of action to protect its intellectual property. “This strategy gave them the ability to execute and act without any other company stopping them,” he says. Under the leadership of a new vice president and deployment of systems, DeChiaro says he helped increase the licensing revenue from $200 million to $2 billion.

DeChiaro spent a couple of years of teaching graduate-level engineering and computer science management courses as an adjunct professor at The Catholic University of America. He next spent three years as CIO of Western Connecticut State University. Finally, he joined Drexel in 2016, where he is dedicated to optimizing the cloud, using a cloud-first approach for new capabilities.

As Drexel enters its 127th year, DeChiaro says that implementing tech projects is especially challenging in higher education because the longevity of pillar colleges and universities comes with a depth of tradition, academic rigor, research quality, and community engagement that has evolved slowly but remains stable. That stability means that change occurs through shared governance.

How to Implement Change

“The best way to implement change is through open communication and dialogue,” he says. “Even if you do that to the best of your ability, there are internal conflicts. With the administrative functions, the value propositions are more easily understandable. On the academic side, contemporary quality instruction runs concurrently with robust IT solutions, so we have to match faculty demand with impressive, cost-effective solutions.”

Given the way he ran his own businesses, learned software development from the ground up, and transformed IBM’s patent process, you get the sense that the challenge is exactly why DeChiaro is there.

Working with technology never dampened Thomas DeChiaro’s other enthusiasms. While working in California for Bank of America, he learned a lot about wine during visits to the Napa Valley. These trips reignited his inner entrepreneur, putting the idea in his head that, one day, he might open a winery. In the late 2000s, while living back in New York, he left the pressure of the corporate world to do just that.

“I decided I wanted to try,” DeChiaro says. “I had the resources, and I found an abandoned church ten miles from my house that had been empty for thirty years. Right when I stepped inside I said, ‘This is going to be amazing.’”

DeChiaro dove into the task of renovating the building and got the business up and running. He subsequently handed the reins to his brother, John, and then dove back into his life’s work.