Insurance companies are, in effect, mediators within the health-care system. Connecting patients and providers, they can help drive efforts to make health-care delivery more efficient and affordable while enhancing quality. Empowering consumers by providing them with more transparency about their benefits and cost of procedures is central to that effort, says Rama Kolli, vice president and chief information officer of Blue Cross and Blue Shield of Nebraska. Driven by the Affordable Care Act, health care is moving from a pay-for-service model to a pay-for-outcomes model. In the former, costs are largely hidden from consumers.

The new results-oriented paradigm depends partially on consumers being clued in on pricing and wisely shopping for care. “We insurers are in a unique position,” Kolli says. “We sit in the middle, and can empower customers to ask questions like, ‘Why is an X-ray more expensive here than it is in the place down the street?’” This new consumer mindset will help to drive cost down, he adds. 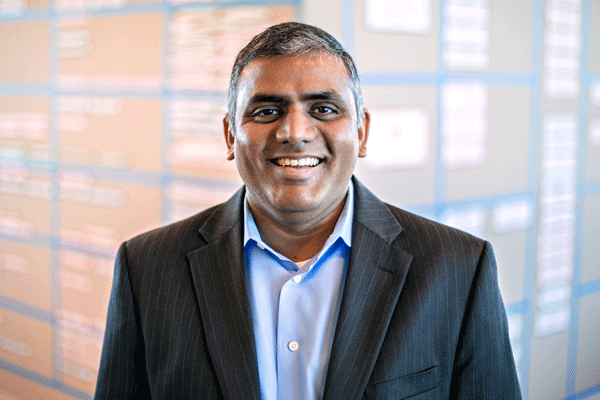 Kolli’s mission also includes making it easier for patients to navigate the complex web of the health-care system. “Health care is extremely complex and fragmented. People looking to get care for themselves or a family member have to hop between their physician, a pharmacy, a lab, back to their physician, and then to a specialist,” Kolli explains. IT can ensure that all players in the chain of care have the same information. Furthermore, putting patients in charge of their health-care history, Kolli says, allows them to verify the information and be more informed, fully engaged, and better enabled to ask the right questions. This can only contribute to better outcomes, he says.

Health insurers can then gather this data and present it to consumers in a form that they can understand and use. Constructing systems and applications for that purpose is the main focus for Kolli and his IT team. Blue Cross and Blue Shield of Nebraska’s member portal gives subscribers access to a wide variety of information about their health plan and expenses, including their explanations of benefits, claim status, out-of-pocket costs for procedures, and how close they are to satisfying their deductible. Much of the heavy lifting on this project occurred on the back end, as Kolli’s team connected disparate legacy systems to populate the portal with the appropriate data.

“We can empower customers to ask questions like, ‘Why is an X-ray more expensive here than in the place down the street?’”

Complicating the effort to deliver cost transparency information are the numerous variations in copays, deductibles, and reimbursements based on the benefits of a particular plan. In order to provide subscribers with individually tailored cost information, programmers have to account for complex policy rules to write code that produces accurate results.

According to PwC’s 2014 Touchstone Survey,

44%
of employers across all industries are considering high-deductible plans as the only insurance option for their employees during the next three years.

33%
of employers are considering moving their active employees to a private exchange in the next three years, and this strategy tends to accelerate employee adoption of higher deductible plans.

Another challenge was to temper industry jargon to make the information more accessible to consumers. This is tricky because insurance is a heavily regulated industry with rules governing how insurers communicate with policyholders, right down to the language used on websites and social media. To solve that puzzle, Kolli’s team overlays simple definitions to explain industry terms. For example, the term “deductible” can be described plainly as “what you pay out of pocket before insurance helps you.”

This method works, as all internal applications development is supported by cross-functional teams from throughout the organization. Business units typically conceive the parameters for a new project, and a representative from IT is embedded within these teams from the beginning. Business units own the project, and a business leader is colocated with IT personnel and representatives from the departments intimately involved with the project. For something like the member portal, these may include marketing, customer service, and legal representatives, among others. The product owner reports to a leader of a business function, rather than to Kolli. The cross-functional collaborative process—in which IT is a full participant but not the product owner—is an important element to the success that Blue Cross and Blue Shield of Nebraska has achieved in applications development in recent years, Kolli says.

Efforts to create and enhance the member portal have been ongoing for about five years, and the company is now on its third iteration of the application. With a sound foundation, work is now focused on improving the customer experience by making the portal easier to navigate and use. Employing an agile approach to development, progress reviews are conducted every three weeks. “This ensures that we are proceeding in the right direction,” he says.

“The customer engagement [in a typical insurer’s portal] is usually less than 10 percent. We are at 15–20 percent, and we think we are going to increase that.”

A new project also targets enhancements to the mobile experience. The mobile app makes it easy for subscribers to find a doctor, obtain cost information, and receive notifications when claims are paid. The company is also working on electronic identification cards that can be shown to providers on their smartphone in lieu of carrying around a plastic card. Key information about policy features and what form of payment providers require will be added. In the future, subscribers will even be able to obtain statistics from their Fitbit or Apple Watch utilizing the app.

According to the Office of Civil Rights under the U.S. Department of Health and Human Services, in the U.S. alone, there were

253
health-care IT security breaches that affected

500+
individuals with a combined loss of more than

The threat of security breaches hovers over projects that utilize customer data. As keepers of sensitive personal information, health-care organizations are attractive targets for hackers, Kolli notes. “Those concerns are not going to stop us, but they shouldn’t be taken lightly,” he says. “We make sure that we are following industry best practices.” The high level of attention to security can mean that projects take longer to complete, but that’s fine, he adds, because security must be a high priority.

Despite the constraints of operating in a high-security, highly regulated environment, Kolli and his IT team foster a spirit of innovation. As a prime example, the company conducts Iteration 48, a two-day event that provides a forum for entrepreneurial exercises. Open to all, the event allows any interested parties to create a small team and work on a project of their own creation for a highly caffeine-fueled stretch of forty-eight hours. “This allows people to do something they are passionate about,” Kolli explains. “If something comes of it, great. If not, that’s okay.”

Inspired by hackathons he’d attended, engineer Marcus Ross wanted to bring that level of innovation and collaboration to Blue Cross and Blue Sheild of Nebraska. Ross proposed an event which would eventually become the first edition of Iteration 48. In that first year, fifteen self-organized teams spent two days conceptualizing new ways to better serve the organization’s clients. The ideas produced in that first event were presented to peers, showcasing innovative ideas including mobile identification cards, apps for fostering better health, and advanced data security strategies, among others. Suffice it to say, the leadership was happy with the results, and  Iteration 48 has grown since its first year. The most recent edition of the event featured nineteen teams. Ideas in the 2015 edition included tools to help users schedule doctor appointments, offer live chatting with Blue Cross and Blue Shield of Nebraska employees, and more.

One important indicator suggests that the company’s approach to project development is helping to achieve the big picture goals. “If you take any insurer’s portal, the customer engagement is usually less than 10 percent,” Kolli points out. “We are at 15-20 percent, and we think we are going to increase that.”

With such notable accomplishments, Blue Cross and Blue Shield of Nebraska’s IT practices are becoming exemplars for the entire industry. The company hosts visits for outside IT teams who are interested in learning about its agile practices. “Historically, IT in health care has been looked at as stale, not innovative,” he says. “We have a department that is very innovative. This baffles my peers. I’m extremely proud of my team.”

Kolli’s professional enthusiasm extends outside of the walls of the organization’s corporate headquarters and into the Omaha community. As a board member of the AIM Institute’s Careerlink, he engages with local schools and organizations to encourage young people to pursue careers in IT. In addition, he volunteers to mentor IT staff within Omaha-area startup businesses, and helps to set up IT internships for people who have been displaced from other industries.

These activities demonstrate a continued enthusiasm for the profession that he committed to as an eight-year-old, after seeing his first PC at a county fair in India. The machine instantly intrigued him. “That day, I told my dad that I wanted to be a computer engineer,” Kolli recalls. “I’ve never forgotten that moment.”

It’s been a long journey from a small town half a world away, but Kolli never veered from the course he began to chart that day. He continues to do his part to advance the work of IT and to transform how customers interact with the complex health-care system. There’s still a long way to go, and Kolli heartily embraces the challenges.