The phone number that Jeani Vance can be reached at starts with a 614 area code, but that does not mean she’s in Columbus, Ohio, where she’s based. In fact, the chief information officer of global brand and marketing consultancy Prophet could be calling from just about anywhere. It gives Vance the perspective to help the firm’s design and consulting teams serve an increasingly global client base without having to spend time and money on travel.

Since much of the company’s work is design-based, face-to-face interaction with clients and project teammates is especially important. “[Prophet] hired me a little over two years ago to come in as interim CIO,” says Vance, who has since joined the company on a permanent basis. “They were looking for someone to take the company to the next level in global collaboration. That’s my number one priority now.”

Vance connects Prophet’s 350 employees, many of whom work regularly from one of its nine offices that are located around the world, from San Francisco to Hong Kong. As a result, employees frequently must collaborate with teammates based in other offices on client projects. 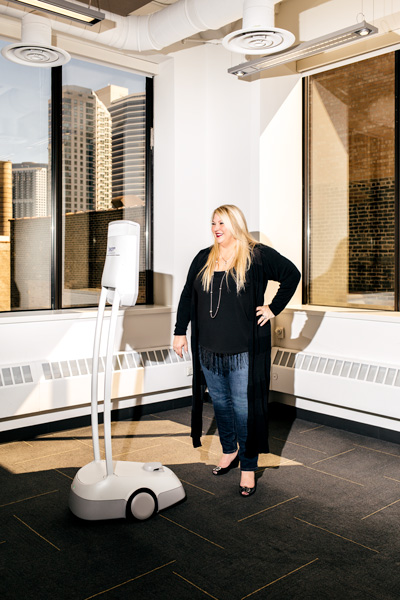 “We’ve invested heavily in infrastructure over the last two years,” Vance says. “Our current technology helps us connect all of our offices seamlessly so we’re on the same network. This serves as a base for new technologies and allows us additional opportunities for global collaboration.”

One project she’s working on now is establishing one central database for what Vance refers to as design artifacts. “A designer can spend hours looking for a particular font or photo they used on a particular project,” she explains. “We are globally centralizing access to those artifacts to save time and money. Our design team will be able to work faster and more efficiently, therefore delivering projects with an increased speed to market for our clients.”

The global collaboration initiative Vance is most excited about, though, involves robots. Prophet is currently using Suitable Technologies’ Beam Smart Presence System in its Chicago, San Francisco, New York, London, and Hong Kong offices. Each office has one of Suitable’s five-foot units, which consist of a seventeen-inch 4:3 LCD screen with built-in speakers and a wheeled base that can motor around the office at up to two miles per hour. “They are the most amazing things,” Vance says. “I can be sitting anywhere in the world, on my laptop or mobile phone, login to the web-based software, click on any of the five units in San Francisco, Chicago, New York, London, or Hong Kong, and interact with everyone in that office just by driving around the office.”

“I can be sitting anywhere in the world, on my laptop or mobile phone, login to the web-based software, click on any of the five units in San Francisco, Chicago, New York, London, or Hong Kong and interact with everyone in that office just by driving around the office.”

The robots also give her and other users a physical presence in each office. For example, if a designer in New York wants to show a fellow designer in Hong Kong something on their screen, the Hong Kong designer can log into the Beam System and motor over to the New York designer’s desk to see the presentation. “I can also drive into a conference room and participate in the meeting, just like I was there,” she says. “If you’re on a conference call and multiple people are talking, you can miss things. With this, you’re in the room and making eye contact with people, interacting, pivoting to see who is speaking, and you’re not a forgotten voice on the end of a conference phone. For the people in the room, they are not focused on the fact that you are on a screen, they view you as being in the room.”

Based on what she has observed thus far, Vance is confident this isn’t novelty technology, and said all five machines have received extensive use since being installed. She said users need some time to get used to working the robots, but once they do, they’re hooked. “The best thing is you don’t miss out on the important conversations that happen after meetings or during breaks,” she says. “People go on coffee breaks, and you just follow them to the kitchen like you would if you were at that meeting.”

But she would also prefer for the robots to have a few additional features. “I would like to see it record. If you want to take a photo of the whiteboard, you can take a snapshot. Or you can record conversations at a meeting so you can revisit it later,” she says.

Given the growing popularity of the technology, Vance would also like each unit to have its own calendar system so employees can reserve them in advance. Right now, the most she can do is see how much each unit is being used and by whom. “As we hit about 75 percent usage on one unit, we will get a second one for that office,” she says.

Vance expects that threshold to be crossed at each of the five office locations soon. She’s already using her 614 number not to call or email employees, but to beam into another office for a visit. In her mind, the next frontier of global connectivity has arrived.