It’s seven o’clock, and you’ve just made it through a long day at work. You’re starving and don’t want to deal with having to talk to anyone on the phone to satisfy your hunger pangs, let alone actually leave the house. Whether it’s chicken tikka masala or pepperoni pizza, senior data scientist Vasyl Harasymiv works to make sure Grubhub can get you whatever meal you’re craving, right when you want it.

For some, Grubhub’s ability to fulfill that promise makes it like a religion—the salvation of the hungry and convenience-driven. Rather than keep a drawer full of menus, figure out the delivery area of various restaurants, and have to read out your credit card number over the phone, Grubhub allows diners to enter their address and have a vast array of culinary experiences at their fingertips.

online and mobile ordering restaurants in over

US cities and London

in gross food sales to local takeout restaurants in 2015

Processes an average of more than

“It’s very important that the diners who come to our platform are able to choose the exact restaurants that they would like to order from,” Harasymiv says. This experience, he adds, encompasses both the financial perspective and the user experience. He wants you to get the pad thai you’ve been thinking about all afternoon from your favorite restaurant without any fuss. But while there are competitors in the online food delivery field, Grubhub digs through mountains of data to deliver the ultimate customer experience. “We have the largest selection that they can get, and we’re trying to offer diners the chance to order from a much larger variety of restaurants than before,” he says.

The Science of Ordering Food

Part of delivering that ease of experience comes from making data-driven decisions. Harasymiv leads a team of data scientists who collect and analyze data, both from Grubhub and outside sources, and use it to improve the experience for diners and restaurants. After spending time at massive organizations like GE Capital and Intel, Harasymiv was excited by the prospect of Grubhub’s agile, data-driven business. “Intel is a chips business,” he says. “More than six million customers use Grubhub, so data really drives the business. Intel has a rather rich structure, but Grubhub is relatively smaller so I’m able to make a large impact on the business model and the outcomes myself.”

Harasymiv is quick to compare Grubhub to a startup, as well as comparing each project he undertakes to a startup within a startup. He and his team tackle everything from gathering data to coding, whereas larger organizations might split all these responsibilities into separate teams. Though that might seem like a daunting challenge, it’s one that Harasymiv relishes.

Harasymiv joined Grubhub in 2015, but brings a world of experience to the position—literally. After growing up in Lviv, Ukraine, he’s studied in Germany and Switzerland, worked in Belgium and Canada, and has now found exciting new opportunities in the United States. Over that time, he’s learned six natural languages, not to mention the programming languages. “The natural languages might not seem to have as many professional benefits, but it does kind of spill out into the ability to study new programming languages faster than the average person,” Harasymiv says. “It also gives me the flexibility to easily switch from one programming language to another.”

Data science is a massive field, one in which nearly every major organization has attempted to stake a claim. And yet, it would seem, the approaches to data analysis vary drastically. “I think there is quite a lot of confusion in the market over who the data scientist is,” Harasymiv says. While some organizations hire engineers with some statistical skills, others bring in statisticians with econometrics or quantitative finance backgrounds. Harasymiv comes from the latter school, 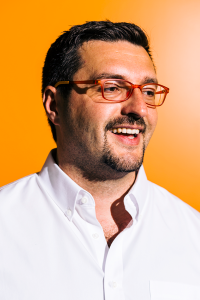 having worked in price analysis at INTALUS and having received a master’s degree in banking and finance. Moreover, Grubhub is a data- and analytics-driven business, one that relies every day on mass amounts of data to predict best practices. By diving deep into the analytics as well as the engineering, Harasymiv and Grubhub are taking major steps in the market. In addition to acting as a facilitator between restaurants and customers, Grubhub has grown into offering delivery as well, leading the delivery process for restaurants that don’t offer it themselves.

“We have the largest selection that they can get, and we’re trying to offer diners the chance to order from a much larger variety of restaurants than before.”

A Leader In Online Food Delivery

According to a new study from 1010data, Grubhub is leading the pack when it comes to online food delivery, garnering 32 percent of all online food orders. “Domino’s Pizza is actively working on robotics, being tested in Australia in New Zealand,” he says, referencing the “Domino’s Robotic Unit,” a self-driving robot-vehicle that delivers orders to customers. Grubhub looks to Harasymiv for that sort of out-of-the-box perspective, taking his international background, finance history, and statistical expertise to find new ways to bring dinner to your doorstep.

As always, the key to that decision-making is the data. Things as simple as a few clouds can have a massive effect on ordering numbers, as more people want to stay in and order a pizza than fight through a rainstorm. Even during a blizzard, with either dinner orders or snow piling up, Harasymiv will have made sure to dig through the data to make it as convenient and wallet-friendly an experience as possible.