Axalta senior vice president and chief information officer Aaron Weis’s core philosophy is “do what you say and say what you mean.” He focuses on being straightforward when explaining what his department is setting out to do and then following through on that explanation, which he says results in clearer goals and more open dialogue. By providing that perspective to a growing organization in a complex, highly technical field, Weis ensures that Axalta works for the people that rely on it.

Axalta develops, manufactures, and sells a wide selection of performance and transportation coatings around the world. Their customers range from among the largest global vehicle original equipment manufacturers to small, family-owned businesses who repair cars and coat products such as electrical components and radio telescopes. The thread that ties them all together, though, comes when vehicles hit the road.

Axalta has been publicly traded since a November 2014 IPO, but the company has been on a journey since it was a division of the massive chemicals conglomerate, DuPont. It was eventually carved out and purchased by The Carlyle Group in early 2013. Along with the carve-out came the predecessor’s complex IT infrastructure processes. What was needed was a far leaner operation—a paint company that would become the only global coatings company focused almost exclusively on industrial customers and the industry leader.

In January 2015, Axalta hired Weis as chief information officer to help provide that high-quality experience by trimming the fat, streamlining information technology to support dozens of business systems, and building a global department in line with the new company’s long-term vision. Part of the reason Axalta chose to bring in Weis was that he had been in this situation before with Sensata Technologies, which had a similar relationship to Texas Instruments as Axalta had to DuPont. For the first year and a half on the job, he did away with a system that had been modeled on a complex conglomerate’s infrastructure, one designed to serve multiple divisions whose focuses were not related to each other and in which much of the IT leadership had been outsourced to partners. His number one priority was to optimize by consolidating ERP and other systems, reworking infrastructure and operations, and distilling SAP. “I needed Axalta IT to be as lean and aggressive as our products are and as our businesses are in the marketplace. We needed to shed the legacy of complexity,” Weis says. 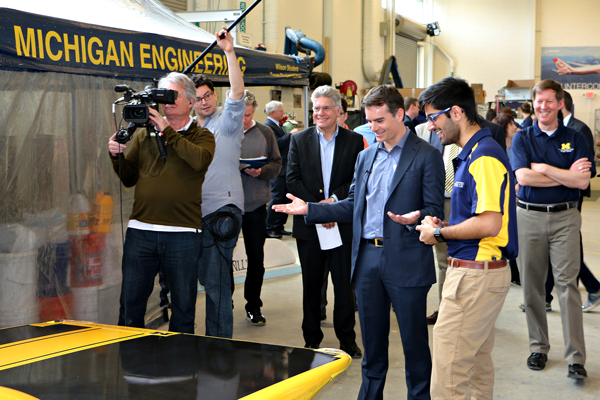 Axalta and the University of Michigan are venturing on a new partnership to benefit the research and education missions of the university. Along for the ride is four-time NASCAR Cup Series champion Jeff Gordon, who is also the current Axalta global business advisor to Axalta chairman and CEO Charlie Shaver and his executive team.

Under the multiyear agreement, Axalta and the university will collaborate on a number of business and research and development initiatives. The first public display of the partnership occurred during the Aug. 28, 2016, Pure Michigan 400 race week at Michigan International Speedway. Axalta hosted several U-M students for events including garage tours, reception dinners, and prime views of races. Students also took part in special panel discussions on the roles of engineering and business from a career perspective.

According to Axalta, the partnership also includes a multiyear commitment from the leading global supplier of liquid and powder coatings to support U-M faculty research through collaborative projects that aim to address future opportunities in the coatings segment.

In building his team, Weis looked for people who had IT knowledge and skills but also relevant business experience. It was important to him that the people he worked with understood the context of what was going on in the transition. For example, the new head of global operations for IT spent a number of years running a global customer service department. Another member of the team spent part of her career in procurement and supply chain. Now, when the business speaks about things beyond IT, they understand what is being said and how to resolve challenges. Weis himself has experience outside of IT as a manager for an automotive company.

“If you look at the people we’ve brought in, each one has some robust business experience—people who know what good looks like,” Weis says. “As we look to build the IT team, I have stressed that each person be the business. Don’t think of engaging the business, but act like you are the business.”

Axalta IT Front And Center

It’s all part of Weis’s plan to bring IT front and center in the company, to get it to the point where it is not merely an implementation department, but part of Axalta’s overall decision-making. “We’re creating direct linkages into other areas,” he explains. “Innovation, supply chain, research and development, engaging with the revenue side and strategy side—we’re facilitating the broader discussion of the company.”

The team looks for ways to use predictive analytics to prevent inequalities, as well as partner with other areas of the business to figure out how to better support value-added services for customers. As an example, they’re looking at extending capability to mobile devices: “We are figuring out how to use IT to provide competitive differentiation,” he says.

One of the factors Weis talks to his team about is how easy it is to get wrapped up in the tech itself and lose sight of exactly how that tech is strengthening the company’s goals—something Weis is determined to prevent. On his first day of the job, he used an overhead projector and put up a slide of a gymnasium with no words on it. “What is this?” he asked the assembled employees. “A gym,” one said. “A place dust collects,” joked another. Then, finally, someone said, “It’s a way to get stronger.” That was the answer Weis was seeking. “That’s the philosophy I bring to IT. It is easy to get concerned about equipment. We get focused on that tech, but that’s just tech. The whole point is, how do we make the business stronger? If we don’t do that, all that stuff is a waste of time.”