After losing his wife to cancer, Jay Ferro left the corporate world to join the American Cancer Society with a mission to revitalize the nonprofit’s stalled tech strategy.

Upon receiving his Georgia CIO of  the Year Award in 2011, Jay Ferro thanked his wife. She had lost her battle to cervical cancer four years prior. A week after his act of gratitude, Ferro’s phone rang.

On the other line was a recruiter from the world’s largest executive search firm. She heard Ferro’s speech and had returned to work with a new assignment: find the next CIO for the American Cancer Society (ACS). Ferro, who had spent his entire career in corporate America, was intrigued by the large nonprofit organization. He went through a lengthy interview process and found what he calls a “match made in heaven.” 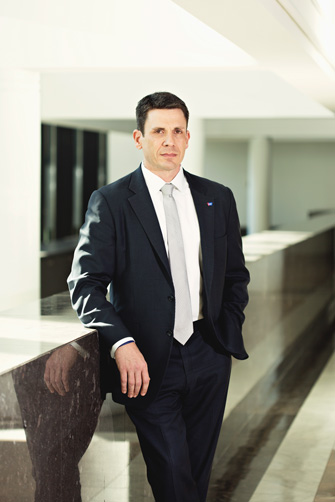 Ferro had entered IT management in the late ’90s, where his career immediately took off when he became the director of IT for a $2 billion health-care company. Subsequently, in 2004, he joined AIG and would eventually lead IT for the company’s global aerospace unit. Recently, Ferro was selected as one of Computerworld’s 2015 Premier 100 IT Leaders.

The CIO position at the ACS was vacant because the organization had embarked on a major transformation sparked by the global financial crisis. The society was once a group of fifty-seven independent organizations but had cut that number to twelve. Still, donations
were down in a bad economy. The organization needed to shift gears, reorganize, maximize every donation dollar, and find new ways to reach volunteers. Board members wanted to streamline the organization, and they decided to start with IT. Ferro accepted the job and stepped in to lead a total IT transformation. “They picked IT to go first because everything else is connected to the department,” he explains. “If we’re going to combine everything, it makes sense to start here and see how it goes.”

At the time, the ACS was comprised of twelve divisions and division boards, a national home office, and an enterprise board of directors. Thus, the group had thirteen IT departments, thirteen strategies, thirteen leadership styles, and thirteen organizational structures—not to mention duplicate contracts, applications, and technologies. “Saying we were losing economies of scale would be an understatement,” Ferro says.

When Ferro started, the ACS had 650 applications. Today, the organization has just 170. “We didn’t remove functionality and shut things down,” he says. “We made choices and focused on what we need to do the work that we’re here to do.” All tech decisions are filtered against the ACS’s mission to help volunteers succeed while researchers battle cancer. Ferro led teams to concentrate on a consistent way of doing business. Now, refresh spend and maintenance costs are dramatically lower, because a single IT department has less infrastructure, and users require less technical support. In 2012, IT at the ACS spent 95 percent of its capacity to keep the lights on and just 5 percent of daily capacity on projects. That balance has shifted to 65-35 in less than three years and will reach 60-40 by the end of 2015. If Ferro reaches his 50-50 goal by the end of 2016, the ACS will surpass industry best practices by a considerable margin.

In short, the change has been outstanding. Ferro and his team have led the organization through the initial phases of a successful transformation. ACS has taken the strategy to all other departments, from finance to marketing. Unlike most large nonprofits, the organization is one legal entity. The move gives the group a huge advantage in the marketplace, as it can be more nimble and agile in its decision making. “We have just one plan to consult, not thirteen,” says Ferro, who notes that he and his peers can now move forward and respond to market conditions, volunteers, and research opportunities. “I don’t need fifty-seven approvals to get something done.”

“People think the nonprofit world is full of red tape, slashed budgets, and subpar talent, but that’s not true. We face all the same issues major companies face. All the things that imace a for-profit cEO impact me.”

That means the organization can make the best use of donor dollars because Ferro has the best talent available working in an efficient system. Perhaps one of the most important ways technology impacts fundraising, though, is through convenience. “We look to give people many avenues for donating, and our goal is to meet people where they are and not make them come to us,” Ferro says. Millennials expect the ACS to have mobile apps and mobile funding initiatives. The IT team has responded accordingly to provide an omni-channel experience.
Donors can send money through paper checks, online, or through text.

Today, volunteers can accept donations by swiping credit or debit cards at events. The new, streamlined infrastructure at the ACS also standardizes the volunteer experience, so those 3.5 million individuals around the world interact with the organization in the same way, regardless of their location. In 2014, the ACS provided patients with more than one million rides to cancer treatments through a volunteer program called Road to Recovery, which was once managed with pen and paper. Now, thanks to the tools Ferro’s team provides, volunteers use secure web apps and private mobile solutions to schedule, track, and map rides—all with text updates and alerts. The ACS can better engage and recruit volunteers, and those volunteers can get better information, receive cancellations, and in turn provide better service to the cancer patients that the ACS serves.

When it comes to his role as CIO at a leading nonprofit, Ferro says not much has changed from his days in corporate America. “People think the nonprofit world is full of red tape, slashed budgets, and subpar talent, but that’s just not true,” he says. “We face all the same issues major companies face. All the things that impact a for-profit CIO impact me.” Cancer.org, for example, gets 70 million hits a year. Ferro navigates security, compliance, and HIPAA concerns. The ACS has a robust presence on social media, and Ferro leads efforts around data centers, app development, and infrastructure. The main difference lies in culture, which Ferro says is a blessing and a curse. “People are nicer but might avoid any conflict that does arise,” he says.

Right now, Ferro’s major project is the redevelopment of Cancer.org. He and his colleagues are working to make the portal more user-friendly and modern while ensuring the public has the same experience on all devices. Additionally, IT is rolling out more sophisticated analytics and near real-time business reporting to gather information as it comes in. Mobile fundraising is another major initiative in 2015: the ACS already has a presence on iOS and Android, but it is introducing mobile check scanning, gamification, and check-in at live events. These efforts will enhance fundraising efforts that are already yielding impressive results—the organization raised more than $800 million annually for each of the last two years.