On a good day, a thoroughbred racetrack equals—perhaps surpasses—the majesty of any major league ballpark or NFL stadium.

CASE STUDY:
THE FANTASY SIDE

The company recently acquired rights to NHCQualify.com, BCQualify.com, and PublicHandicapper.com, a trio of sites it now refers to collectively as its “tournament” space. Players can sign up, choose horses, and place “mythical wagers” on racing events. The top performers then get to attend live handicapping championships in Las Vegas and at the Breeders’ Cup to compete for multimillion-dollar purses.

As of press time, Unger hoped to have new platforms launched for each site by the end of summer 2015 that will rival the sophistication of platforms at major daily fantasy sites such as FanDuel and DraftKings. And, the sites will also eventually integrate DRF.com data with data from tote betting systems, which track live odds.

The idea is to make the fantasy side as user-friendly as possible to gradually introduce more people to the sport. “These online tournaments,” Unger says, “they’re easy to enter, easy to understand, and they’re starting to attract a younger and more diverse audience to racing.”

There’s the shining sun, the freshly cut infield grass, and the fine dirt of the oval course itself, raked in rows as neat as a Zen rock garden’s. Once the races begin, there’s also the rapid-fire chatter of the announcer, the eye-popping colors and patterns of jockey’s jerseys, and the grace and proud musculature of the horses themselves. And, of course, there are the horseplayers, watching intently, Daily Racing Form in hand.

It’s a full sensory experience, and now you can get a taste of it anywhere thanks to Daily Racing Form’s new and expanding digital offerings. The 121-year-old horseplayer bible has evolved into a real-time online and mobile presence with both reporting and wagering services, and much of its transition has come courtesy of chief digital officer Todd Unger and his team.

Unger joined Daily Racing Form in 2010 to accelerate its digital transformation with his combined experience as both a consumer-facing product developer and a digital executive. He began his career with Procter & Gamble Co. and Leo Burnett Company, Inc., and at the latter he came up with the idea and tagline for Gladware containers: “the containers you love to use, but can afford to lose.” Eventually, he joined America Online in 1997 as a product manager, and from there he moved further into the digital realm for companies as diverse as Lifetime Television and Major League Gaming.

He met media player John Hartig while working for Lifetime, and later Hartig reached out with a new job opportunity after becoming CEO of Daily Racing Form in 2008. He wanted Unger to help transform the venerable brand for the 21st-century digital marketplace. “The company I joined was pretty much still a newspaper-first company at that point; it was repurposing content online,” Unger says. “The company we have now is an integrated, premium content-and-services company that serves the horseplayer across all platforms.”

Unger’s first task was to conceive a new programming strategy for DRF.com, which led to the addition of video, email marketing, and more. There was still something missing, though; people were coming to the site by the thousands to get handicapping information for races, but they had to go elsewhere online to place bets. “What we were hearing from people was, ‘Boy, it would be really great if we could just do that all in one place,’” Unger says.

Plenty of people are still playing the ponies. According to Unger, about $10.6 billion was wagered last year on approximately 30,000 races in the United States. Roughly 30 percent of that money was bet online, where horse racing is the only sport Americans can legally gamble on. So, when Unger and his team launched DRF Bets in spring 2011, it immediately became a major new revenue source. They built the betting service for web and mobile through a partnership with Xpressbet, which handles all back-end wagering operations so that Daily Racing Form can concentrate on marketing and customer
development.

Unger’s second major innovation came to him while he was in the stands at Florida’s Gulfstream Park in January 2014. He was doing his own handicapping with the print edition of Daily Racing Form and thought to himself how useful it would be to have the reporters’ latest insights at his fingertips. “Most wagering occurs five minutes before post time,” he says. “So, there’s this real need for people, as they’re playing, to get real-time, last-minute information.” He wrote down “real-time DRF,” took it back to the office, and two weeks later launched the first test of DRF Live. 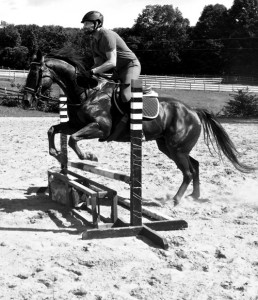 Todd Unger’s daughters have been riding horses for several years, and his wife recently picked it back up again, too, so he opted to join them rather than watch from the sidelines. He can already canter and is now working on jumps, right, and here he shares what he’s learned from his lessons so far.

Lead with your eyes and legs. “A lot of people think that horseback riding is about steering with your hands and shouting ‘giddyap.’ In reality, you lead by looking where you want to go and communicating with pressure from your legs.”

Keep a leg on. “You’ve got to keep the pressure on the horse when you go over a jump. Otherwise, it will stop and you’ll go flying.”

“Fix it forward.” “This is a favorite quote from my instructor. When things are going wrong or getting messy, don’t stop. Fix it in motion.”

Don’t be afraid. “When you see your instructor literally raise the bar, it can be a little scary, and your horse can sense this. I’ve learned to just set that fear aside and take the jump.”

Caring is part of the lesson. “For every hour of riding, there’s an hour of tacking and untacking the horse, and this time is just as important in terms of connecting.”

Daily Racing Form’s development team built the reporters a special mobile app that allows them to post breaking information and stats directly to DRF.com and Twitter; the reporters took to the idea immediately because it lets them publish from anywhere in an instant. DRF Live took off in summer 2014, and approximately in tandem with it, Unger and his team revamped and rereleased DRF Formulator for both the web and tablets. Formulator is a comprehensive, interactive database that allows users to customize the way they look at horses’ past performances. With lightning speed, dozens of stats can be called out or hidden, and horses and riders can be highlighted and arranged as needed. Formulator offers so much data that can be looked at in so many ways that the company hired an analyst to mine it full-time for trends, which he then presents to users to show them new ways to use the database.

DRF Live has already “made its way into the fabric of everything we do in terms of content,” Unger says, “and updates instantly ripple across our whole digital platform.” Soon, he will integrate it even further with DRF Formulator and DRF Bets. “We’re so far past that idea of the newspaper versus the digital,” Unger says. “We’re just one content-production company that wants to help people play better. That’s the big change for us.”